There was one lion left gorging himself on the remains of the hippo. He was blind in one eye and had a face full of fresh and congealed hippo blood and every time his head emerged from the bowels of his prey he looked at us with disdain and continued eating.

The other 13 lion of the pride had eaten enough and were making their way along a track in single file through their territory as lion are wont to do. Dave, our dark haired, 25 year-old, stereotypical game ranger placed the vehicle in their path so that they could walk past us within touching distance as they went about their business. They too had congealed hippo blood on their jowls and bloated stomachs from their indulgence on hippo meat and were watched by vultures that had gathered in the trees, hoping the last lion would leave and their turn at the kill would come.
We followed the pride onto an open plain and watched as they slowly made their way up the gentle rise to a date with a herd of buffalo that were upwind of them and unaware of their most feared predator not 50 metres away. 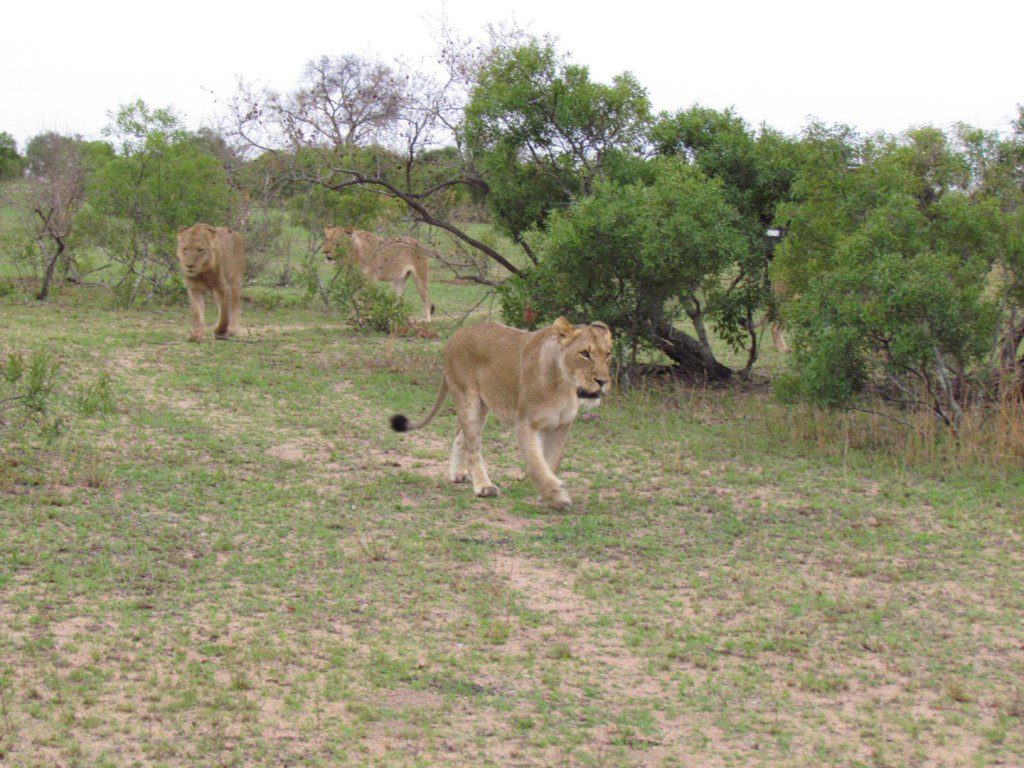 We thought the lion, already tumid and lethargic, would ignore the prospect of another feast and simply agree that the buffalo would have to wait until another day, but we were wrong. The minute the first lion caught sight of the herd, the rest of the pride fanned out and began a slow crouch in formation below the line of the long grass toward the calm and unsuspecting bovine, still upwind and moving as a herd down the hill toward their fate.

All hell broke loose as the buffalo walked into the lion and the young males of the herd gathered on the front line to defend their women and children. They had an inkling that the cats were slow and fat so they ran at them like demons possessed, determined that no buffalo would die today. Two lion had worked their way around the flank of the herd and had separated two female buffalo and their calves from the safety of numbers. They began the chase but their tumescence gave the buffalo an edge and the young males stood their ground and put paid to an opportunistic but doomed attack by a greedy predator over an organised defence. We left the scene which had returned to relative calm with the predator lying in the long grass and the prey milling around with one eye on their enemy and the other on the green nutritious shoots that had emerged with the spring rains. 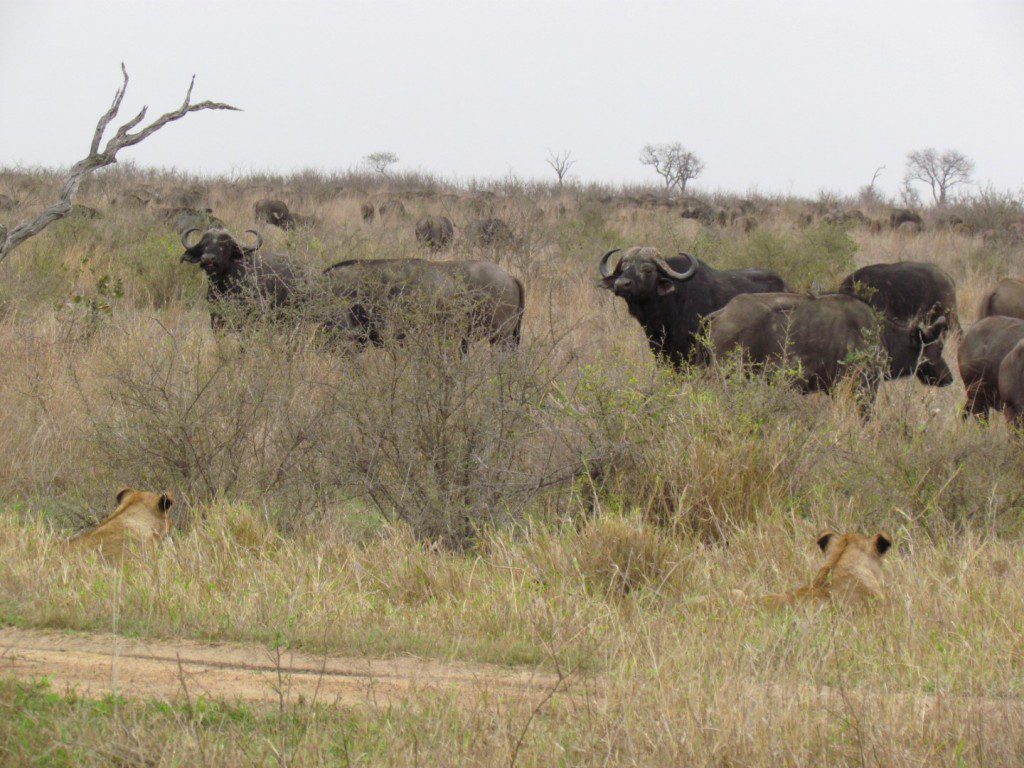 Another day and perhaps a different outcome, and we made our way through the soft rain on the lookout for another of the animals that share this land at Londolozi. It came in the form of a white rhino, solitary on a vast plain, alone and vulnerable. There’s no jumping on the radio to tell other parties of the whereabouts of this beast, their near extinction means only the anti-poaching unit and those fortunate enough to cross its path on a game drive will know where it’s hiding. He was a big fella and he carried the fate of his species with an almost sad demeanour, not even bothering to huff or puff or put on a show of dominance – just contemplation, silence and our absolute awe at a prehistoric animal that put its trust in us interlopers, hoping we were the ones shooting with cameras. 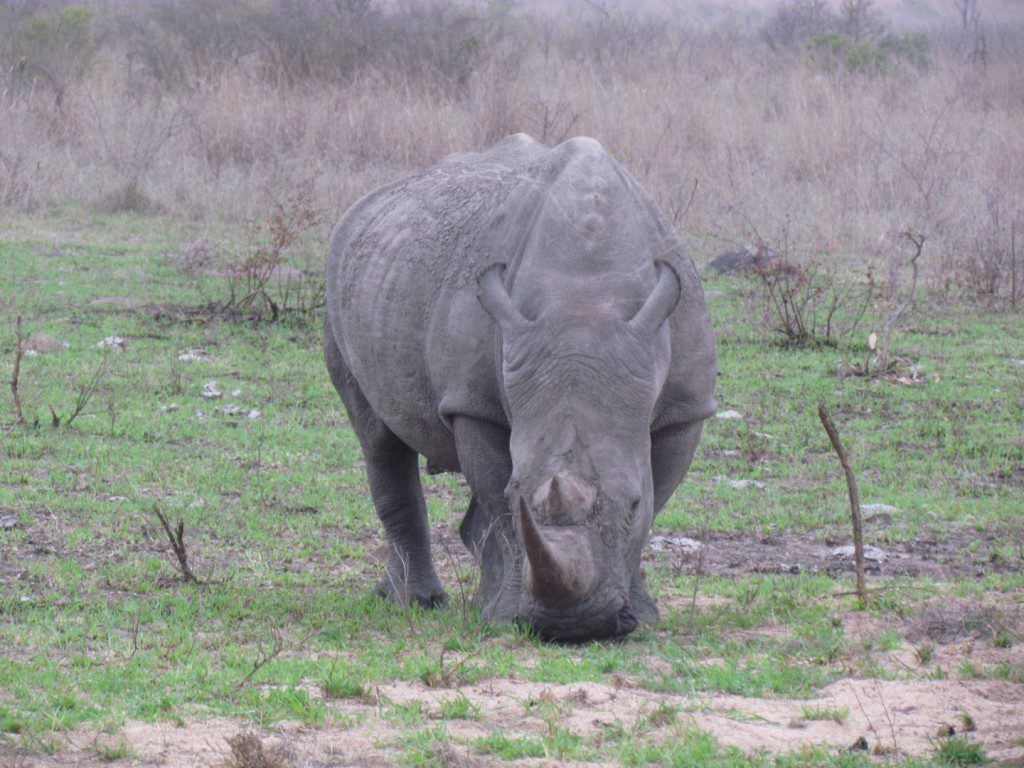 As one is accustomed on a luxury safari in the Sabi Sand we saw the other two of the big five, elephant (very close up) and leopard (in the distance), as well as a pair of hyena, crocodile, giraffe, kudu, hippo (alive and well), bushbuck and impala. It was a short stay and the reveal of the Second Plénitude – Dom Pérignon P2 Vintage 1998 was the main reason for the visit. But Dom Perignon had something else in store which would combine the open veld as the domain of the wild with the celebration of luxury in the First Plénitude – Dom Perignon Vintage 2005.

We stood in a clearing, one of the original Londolozi Series II Landrovers was filled with ice, chilling bottles of the Vintage 2005 for its African reveal among Africa’s wildlife under an African sky.

The surroundings we found ourselves in were unique, just as the conditions in the vineyard need to be for a vintage year to be realised and this is what Dom Perignon says about 2005:
“Due to an unusually hot and dry season, 2005 was full of contrasts. August’s heatwave was tempered by September’s coolness and abundant rain. Outbreaks of Botrytis – grey rot – developed on the only Pinot Noir. Fortunately, this threat was balanced by the good weather that reappeared at the start of the harvest.
Nevertheless, it takes much discernment to continue making the right decisions, to face the uncertain, and to preserve Dom Pérignon’s wine ideals.

The first step above all is to allow the grapes to reach their optimal maturity – they must be filled with the potential of the vintage. When the Chardonnay harvest began on September 14, the decision was taken to wait three more days for the Pinot Noir.

At the end there remains only a limited volume, brilliant and full of July and August sunshine.”
And so ended the day, drama in the bush, on the stage of a wildlife sanctuary, drama combining beautiful creatures with beautiful wine and reminding us that these things are fragile – they happen without plan, as nature wants them to happen with us as spectators, powerless to intervene and accepting of the outcome.
Londolozi is situated on the Sand River in the very heart of the Sabi Sand Game Reserve. This reserve in turn forms part of the Greater Limpopo Transfrontier Park, a vast and growing area, currently covering 6 million acres and incorporating the famous Kruger National Park. This rich, wild wonderland assures exceptional game drives and a true wilderness experience.
Breeding herds of elephant and buffalo roam throughout the Londolozi area, while white rhino and lion concentrations are amongst the highest recorded on the African continent.
However, it is the truly remarkable relationship which has developed over three decades between wild free ranging leopards and ranger and trackers which makes Londolozi world famous. There is no disputing that viewing the leopards of Londolozi is one of life’s truly treasured experiences.
A Londolozi safari is about engaging all the senses and participating in the journey, so that you come away charged, enlightened and ready for the next adventure.
www.londolozi.com

Of Presidents and Royals