From the aeroplane co-pilot seat, I gaze down at the Okavango Delta as we sweep over the many rivers and lagoons. Islands – with a barren centre and circles of trees on the periphery – form fascinating repeating patterns in this region proclaimed one of the seven natural wonders of the world in 2011. From Maun we fly north east to the Selinda concession. I am met by Oboletswe Merafhe, my guide from Selinda Camp, who drives me on dust tracks across the grassy plains -surrounding the seasonal spillway between the Okavango Delta and the Linyanti wetlands – to a pride of 18 lion.

At first they are snoozing, as lions are wont to do, but then the nine cubs wake, greet each other and begin to play. This is one of two prides that are regularly spotted in this private concession. As we have to cross the Selinda spillway in a motorboat before dark, when hippos begin their forays out of the water and Pampas grass to graze, we have to leave this charming sighting. During the exhilarating boat trip, I watch the reflection of the fast-fading light in the wake and see skeins of birds silhouetted above the vivid orange horizon. 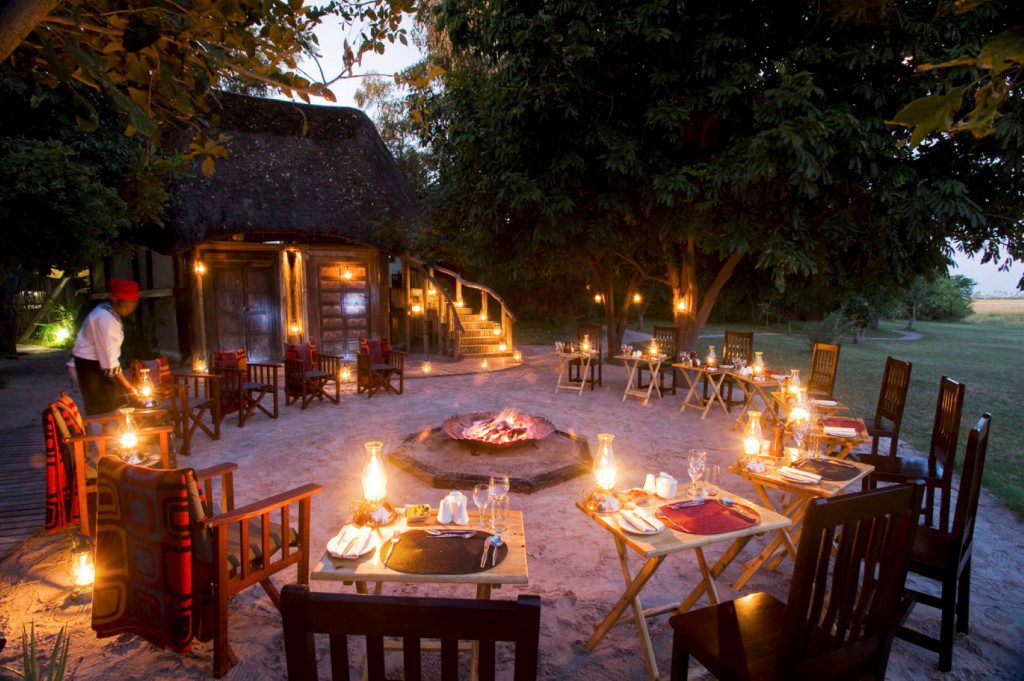 Selinda Safari Camp is positioned alongside the spillway, so each of the seven Meru tents sports a magnificent view of the water and flat plains, broken by very tall illala Palm trees on the distant horizon. Tents are raised on wooden stilts, to buffer the ebb and flow of any floodwater, so I can lie on my kind-sized bed, eye-level with the tops of trees, to watch the antics of birds. As the camp is unfenced, you have to be escorted by a guide to your tent after dark. Next to my tent, is a mound of sand where a bull elephant regularly visits to take a nap. Hippos punctuate the night with their grunting and grass munching.

Although the overall feeling of the camp is simple and rustic, there is a high level of luxury. Tents are spacious, airy and immaculately clean, with a large bath and shower on a wooden deck, separated from the bedroom by sliding doors. The predominantly khaki colour scheme is accented with rich red elements like Persian carpets and a throw on the bed. Antique furniture of heavy, dark wood includes the solid bed, with its swathe of mosquito netting forming a canopy, plus an appealing desk with many drawers. Glass decanters set on pewter bases contain sherry and an old-fashioned packing trunk houses the tea and coffee provisions. The Out of Africa theme is gently sustained. A highlight in my tent – and in several areas of the camp – are the sensitive, evocative game photographs by Beverley Joubert. She and Derek have spent years in the bush, in this area, filming the lions that have adapted to hunting through the water. 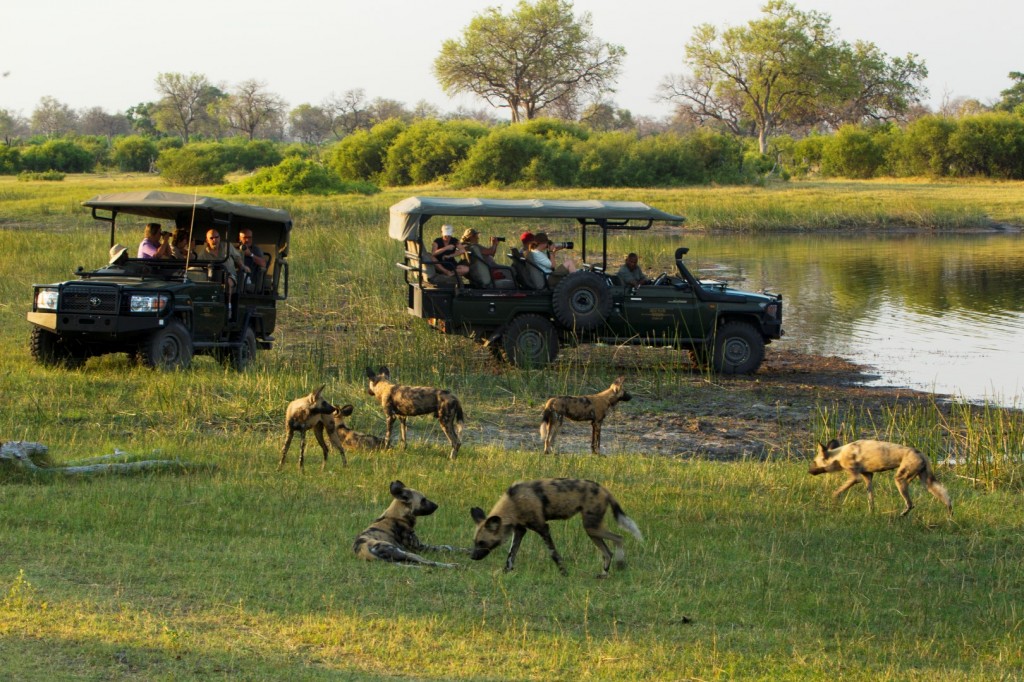 The love and respect that the Jouberts have for nature is reflected in all the ways that Selinda Camp considers the environment. The aim is to have a neutral footprint. Waste is separated for recycling and flown out of the concession, water from the spillway is purified for use in the bathrooms and plastic water bottles are eschewed for individual metal ones, which guides refill and guests may keep. LED lights softly illuminate the dust path leading from the tents to the dining area. On evening game drives, the guide uses a red filter on the spotlight, not to disturb nocturnal animals like African wildcat, large spotted genet and leopard, as little as possible

Two packs of wild dog are regularly seen in the area and I am thrilled to watch both groups extensively during my stay. From the vantage point of the vehicle, we follow the pack of 18 dogs that are on the hunt, until they disappear into an area too thick for even our sturdy vehicle to follow. Careful off-road driving is permitted for special sightings, so I am privileged to see a herd of roan antelope at close quarters. This game rich private concession is also abounding in birds. I tick 92 species, without using time to identify the small non-descript ones.

Morning tea and evening sunset drinks are accompanied by delicious fare my favourite being chickpea and fresh parsley dip with homemade crisps, which finely complement the Tanqueray gin, tonic and slice of lime, served in a pewter goblet. Actually all the food is delicious and imaginative, as well as being healthy.

There are large breeding herds of elephant, pods of rotund hippo and bold coppery-tailed coucal year round in the lush reeds of the Selinda Spillway. Cared for by the warm and relaxed staff in Selinda Camp, I realise I have experienced Africa at its best, as I take off into a cloudless sky.

Lion’s View – A Perfect Vacation from the World