Shortly after the announcement of a new aluminium architecture that will become the future of Rolls-Royce models, the termination of the two iconic Phantom derivatives seemed imminent with the Wraith snatching the performance coupe mantle and the new Dawn set to make an impact on the convertible stakes.

And get in the queue because 50 unique Dropheads and Coupes – called the Zenith – will make up the final task on the production line before they pull the plug.

A Phantom VIII Limousine is planned for next year.

Read the full Rolls-Royce statement below………… 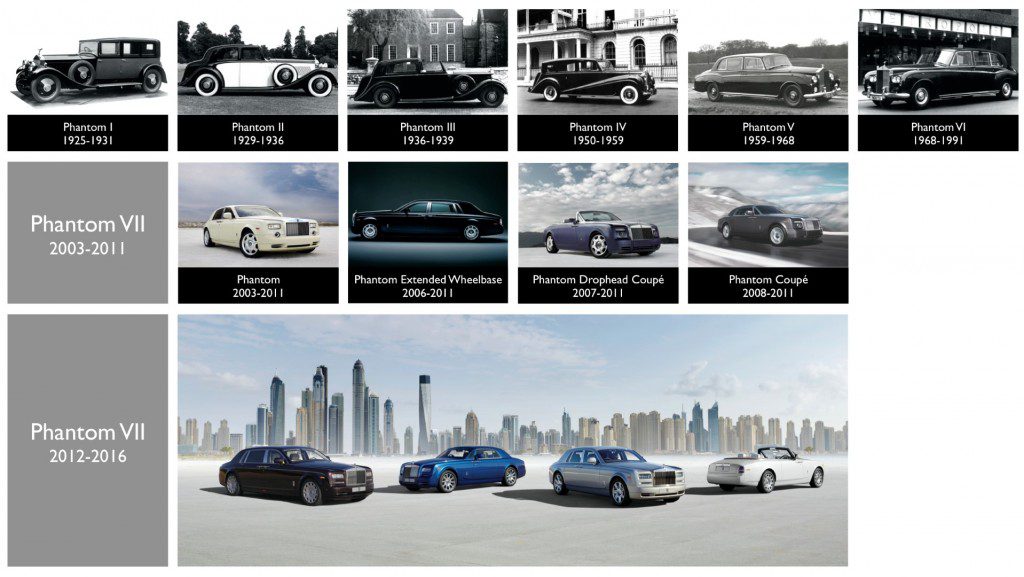 “Rolls-Royce Motor Cars Chief Executive Officer, Torsten Mueller-Oetvoes, has announced that the current Phantom will enter the last stages of its celebrated production in 2016. This announcement follows the recent news that Rolls-Royce Motor Cars has begun testing its all-new aluminium architecture, which will underpin every future Rolls-Royce arriving in-market from early 2018.He also announced that Phantom Coupéand Drophead Coupé models will not be renewed in the future. These two magnificent Phantom models will end their lives with a special collection of only 50 highly desirable cars to be called Phantom Zenith Collection.

The current seventh generation of Phantom started production in Goodwood over 13 years ago and quickly became the foundation upon which the renaissance of Rolls-Royce Motor Cars was built. A magnificent, graceful and powerful statement of the marque’s claim to the very pinnacle of super luxury, Phantom VII is now approaching the end of its production.

During November this year, the build of the very last Phantom Coupé and Drophead Coupé at Goodwood will be completed. These models will not be replaced. Collectors around the world will be excited to learn that a spectacular collection of 50 unique Coupés and Dropheads, called Phantom Zenith Collection, will be built to celebrate the end of production of these truly exceptional cars.

Torsten Mueller-Oetvoes said, “I am proud and excited to announce that a new Phantom is on the way – a contemporary and beautiful Phantom enhanced with cutting-edge technologies and design innovations. Any new Phantom is an historic and important moment in automotive history and we are working hard on perfecting the Phantom VIII.”
Rolls-Royce Motor Cars reset the benchmark for luxury motor cars in 2003 when it launched Phantom VII, a motor car that has remained the pinnacle of pure luxury for the last 13 years. Over those years Rolls-Royce created many fantastic Phantoms that stunned the world with their beauty and redefined the notion of pure luxury motoring.
Now it is time to take the next step in the luxury journey.

Even as it prepares to leave the world stage, Phantom VII will continue to set the benchmark for luxury motoring with a number of limited-run collector’s pieces, each of which will be the last of their line.
To mark their exit, Rolls-Royce Motor Cars’ Bespoke design department will create the most highly Bespoke examples of each Phantom model to date – Coupé, Drophead Coupé and Limousine. At the same time the craftspeople who build each Rolls-Royce motor car to roll down the line at the Home of Rolls-Royce at Goodwood are already preparing themselves for the painstaking work that will go into these very special final motor cars.

The first of these special collections will be named PhantomZenith Collection, and will be the last ever Phantom Coupéand Drophead Coupémodels available to commission from Rolls-Royce Motor Cars.
“As the name promises, Phantom Zenith Collection will be the pinnacle; the best of its kind; the highest standard achievable by which everything else is judged,” comments Director of Design, Giles Taylor. “It will be the sum of all the best features of Phantom Coupéand Drophead Coupé, with a few surprises added. We expect huge demand for these 50 fine cars as we shall not look upon their like again.”
Such surprise features will include a Tailgate Hosting Area; laser etched armrests depicting the original launch locations of 100EX in Villa D’Este and 101EX in Geneva; Bespoke instrument dials and a special treatment of the iconic Spirit of Ecstasy figurine. Each customer will also receive a ‘money cannot buy’ portable memento of his or her purchase, whilst the motor cars will be offered to clients in a palate of memorable colour combinations from Rolls-Royce’s history.

Phantom VII – The return of the pinnacle of automotive excellence

The launch of the seventh generation Rolls-Royce Phantom, on 1 January 2003, was much more than the reveal of a new super-luxury car; it signalled the 21st Century renaissance of the world’s most famous luxury automobile brand and the first glimpse of a masterpiece that quickly established itself at the pinnacle of automotive excellence, leading where others could only try to follow.

For the preceding five years, and in the absence of publicity, designers, engineers and craftspeople had overseen the birth of a flagship Rolls-Royce motor car and state-of-the-art production facility on the Goodwood Estate in Southern England. Without parallel in the car industry, the achievement was all the more astonishing for a brand which shouldered the weight of automotive history and for which expectations for the future were rightly very high.
From launch, the Rolls-Royce Phantom proved itself a worthy recipient of the famous Spirit of Ecstasy figurine. From its Pantheon grille to long rear overhang, the design was clearly a Rolls-Royce. Every angle revealed a bold yet elegant car with road presence that was second to none.

From 2005, new variants of Phantom VII were added. First was the Phantom Extended Wheelbase, followed by the ultimate in luxurious open-top motoring, the Phantom Drophead Coupé in 2007 and, in 2008, the Phantom Coupé, Rolls-Royce’s sophisticated grand tourer.

All these beautiful cars are timeless in their appeal, and have been the cornerstone of Rolls-Royce’s Bespoke offering to its clients’ sophisticated requirements, allowing them to create individual works of art with their superlative cars. Today, every Phantom that leaves the Home of Rolls-Royce at Goodwood has Bespoke features. ‘Waterspeed’, ‘Aviator’, ‘Metropolitan’, ‘Maharajah’ and ‘Serenity’ are a few of the names of Iconic Bespoke Phantoms which have entered private collections around the world and will live down the years as some of the most beloved Rolls-Royces ever.”