Lamborghinis are head-turners, of that there is little doubt. The bulls from Sant’Agata usually garner more appreciative stares than the super models from Maranello or the British beauties from Woking. Models from the Audi-owned automaker are usually brash and are available in over top colours that highlight their dramatic shapes even further. Visual drama is standard fare when you drive a Lamborghini so these machines aren’t really for the shy retiring types. The current baby of the family is the Huracán, a car that is already arrestingly good-looking, but now Lamborghini has turned up the wow factor to 11 by removing the Huracán’s top. 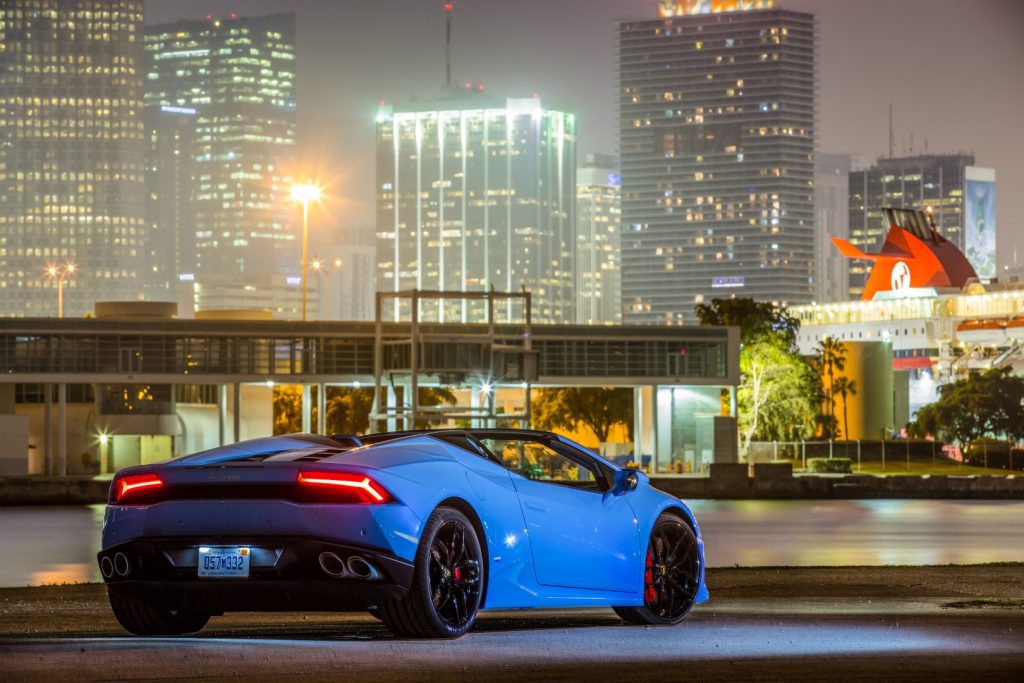 First revealed late in 2015, the (deep breath) Lamborghini Huracán LP 610-4 Spyder, to give it its full title, was launched properly earlier this year. Anyone who has seen the car in pictures would deem it lustworthy, but up close and personal the sense of desire is heightened even further. A drop-top version of the Huracán was always part of the new model roll-out from the conceptual stage of development. After the rear-wheel drive LP580-2 was launched late last year, the open-top version was next on the cards.

“The Huracán LP 610-4 Spyder is the next chapter in the success story of the naturally aspirated V10 Huracán, and continues a Lamborghini tradition of open air motoring,” says Stephan Winkelmann, President and CEO of Automobili Lamborghini.

Starting with the same carbon-aluminium platform as the coupe version (and the Audi R8 stable mate) is an ideal basis for a roadster as the stiff platform is perfect for resisting that dreaded bugbear of open-top cars, flexing. If you were fortunate enough to own or drive a Gallardo Spyder (like our esteemed publisher) then you will be pleased to note that the new Spyder is 40 percent more rigid than its predecessor and has lost only 10 percent of overall stiffness compared to the Huracán coupe. 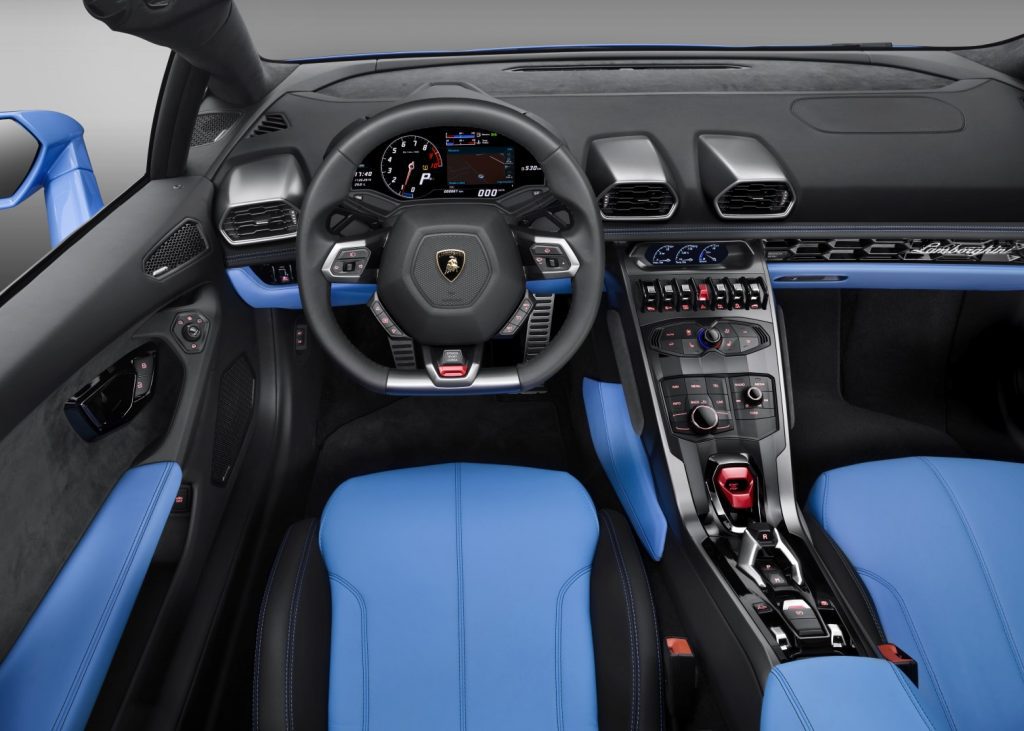 The overall shape of the Huracán remains, but there are certainly design elements which help differentiate the Spyder. Firstly, there is the soft-top. Lamborghini has adopted a fabric roof over a folding hard top to keep mass and complexity to a minimum. Incidentally, buyers can have the roof in three different colours: black, brown and red. Two movable fins become visible during the roof stowage process, rising out of the folding roof cover. Enhancing the car’s low, powerful appearance, these rear fins start at the seatbacks and continue the roof line to the rear, perfectly shaping the silhouette of the Spyder.

The totally new electrohydraulic, lightweight roof opens in just 17 seconds up to driving speeds of 50 km/h. Whether the soft top is up or down the rear window, which functions as a windshield, can also electronically be opened to let in the unique sound of the high-revving, naturally aspirated engine. Wind noise and buffeting within the cabin with the roof down is kept to a minimum thanks to careful aerodynamic tuning. Two removable lateral wind guards, or ears as dubbed by some of the Lamborghini staff, curtail the lateral aerodynamic pulsations, which usually cause an uncomfortable pressure build up in the cabin. The upper part of the windscreen surround has a wind brace to direct airflow over the cabin away from the heads of the occupants, and there are the aforementioned fins, which help smooth airflow aft of the cabin and into the engine compartment. For those concerned with safety, hidden pop-up bars do not spoil the open car’s low silhouette but are deployed in fractions of a second should they be needed in the worst case scenario.

Residing under that engine cover is the same V10 found elsewhere in the Huracan range. Power levels in the Spyder are identical to the coupe version. 449 kW and 560 N.m of torque is delivered to all four wheels via the evocatively named Lamborghini Doppia Frizione, which translates to dual-clutch transmission.

The Spyder zips from standstill to 100 km/h in a scant 3,4 seconds (only 0,2 slower than the fixed roof version) and will do 324 km/h flat out – roof up or down. Shuffling between the seven ratios lets one experience the vocal delights of that untainted V10 powerplant over and over again, and with the roof packed away, the delight for your ears is even more enjoyable. With Ferrari now employing turbochargers in its 488 GTB and McLaren products that have always been force-fed, the Huracán is unique in this trio by being normally aspirated. 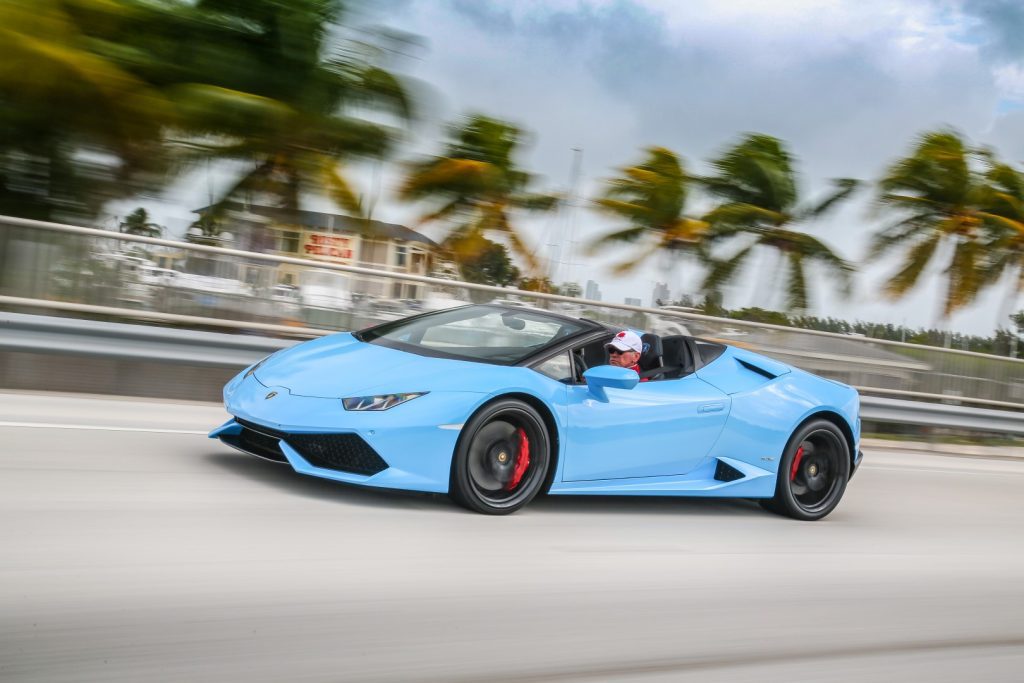 We experienced the Huracán Spyder in a part of the world that is renowned for open-top motoring and great weather, Miami Florida. Even in a city that positively reeks of wealth and every second car seems to have a folding roof this newcomer certainly has the desired effect of turning heads. Mobile phones were whipped out faster than you could say “Instagram” and there were endless hand gestures and shouts for us to let the engine be heard at full chat. That high-revving motor not only sounds eargasmic but it makes the Huracán a delight to drive as responses to one’s right foot inputs are immediate and each prod of the loud pedal emits that signature V10 howl.

With the roof down the Spyder certainly cuts an attractive shape and we can confirm that the fine tuning of the aerodynamics makes the cabin an easy place to be, though a sunscreen dispenser should be a standard item as owners will, or should, seldom drive their Spyders with the roof in place. Though, with the triple layer roof up the Spyder feels very much like its coupe counterpart, so this really is the best of both worlds.

We have little reason to doubt you Signore Winkelmann.

The Power of Design