Igor Lobanov, Yacht Designer, tells how the project came about: “The initial idea of the Star belongs to Alex Malybaev from FIRMA branding agency. Alex and I exchanged some thoughts about yachting and came to the conclusion that to those outside the marine industry, all yachts look the same: It seems that modern architecture, product design and car design have no influence on yachts. Malybaev penned an idea “on a napkin” and asked me if a yacht could be like that. I looked at the sketch and set to work. The idea was so great that I wanted to prove it could become a yacht.” 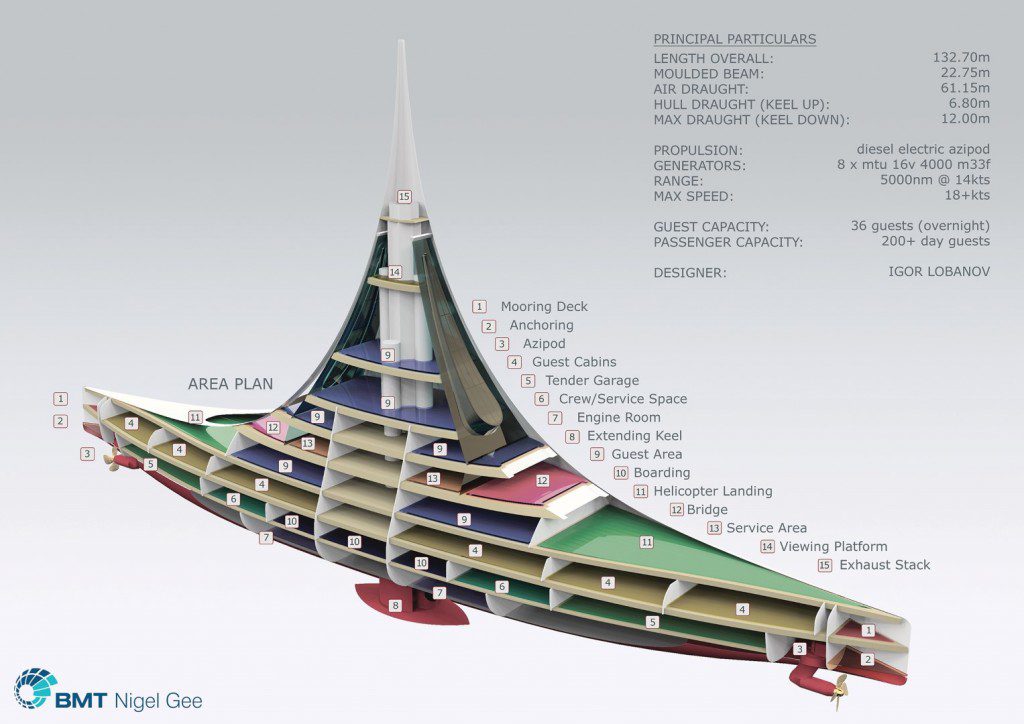 Collaborating with BMT Nigel Gee for naval architecture and to assess technical feasibility, STAR has been developed as a private yacht, or more radically, as the world’s most exclusive private hotel, redeploying to the world’s iconic marine cities and events worldwide. STAR rethinks both artistic form and content.

Measuring 132m in length and over 60m in height STAR’s technical development features a symmetrically fore & aft double ended hullform, with all electric architecture and fully azimuthing propulsion. Coupled with a dynamic positioning system STAR would rotate within her own length to track the arc of the sun free from the constraints of traditional anchors.

The vessel has been designed with a maximum speed of 18+knots and with a range at 14knots of 5000+ nautical miles. Over 3500 sq.m of luxury interior space is provided within the 9000 Gross Tons, whilst a central cluster of four lifts provide access across eight decks.

Notably lifts one and three extend from a sub-marine viewing area within the lifting keel up to a viewing platform on the eighth deck offering unprecedented views down onto the unique form of the vessel itself, as well as providing a range of visibility of over 20km.

James Roy, Yacht Design Director of BMT Nigel Gee concluded, “Historically yacht design has been described as both an art and a science. STAR is a tangible view of a 21st century interpretation of art and science. We are fortunate to live in an era where technology makes the delivery of bolder designs more possible – for clients who are adventurous innovator anything is truly possible”.

The Return of the Monster Alfa Giulia GTA